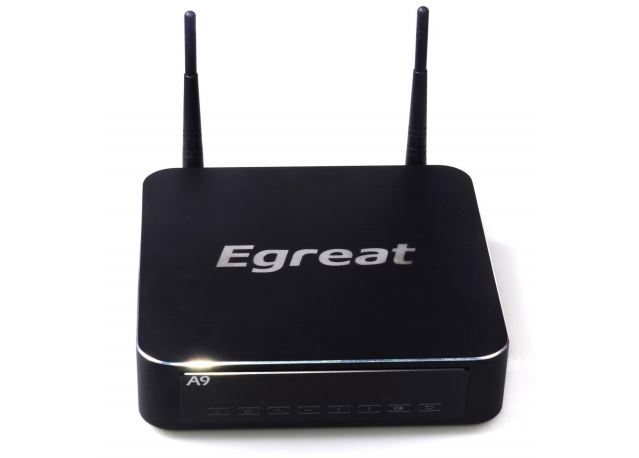 Looks like Mstar MSO9180 finally gets some real-world use with the launch, at CES 2015, of the new Egreat A9 Mini PC.
This is one of the new Mini PC’s that Egreat will announce, check out the Egreat 2015 roadmap post to see the others.

As you can see in the below images, this mini PC will use a strong aluminum case with VFD which allows a 3.5” HDD to be mounted inside (same case used by the Egreat R300 media player a few years back).
As usual with the newly announced models, they claim to support 4K/Ultra-HD videos (although just at 30fps, due to HDMI 1.4 limits).
The mini PC will support H.265, BluRay ISO’s, 3D movies (and not just SBS and top/Bottom, Frame Packing 3D also).
They also mention Dolby TrueHD and DTS-HD MA 7.1ch RAW audio passthrough.
But what caught my eye was the Vidon.me logo – does this mean that Egreat has some sort of partnership with Vidon?
[Update] – Both Egreat and Vidon.me confirmed for MiniPCDB that they are indeed working together. This makes the Egreat A9 unit even more interesting.
This unit can also record an 1080P stream using the HDMI-In interface,  feature that could be useful for those that have a HD TV receiver, for instance. 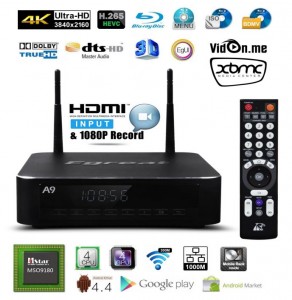 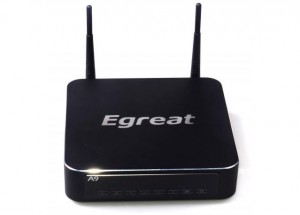 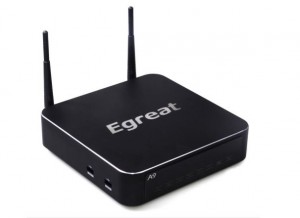 Until last year Egreat was one of the most important manufacturers of media players in China, their products were based on Realtek (and a few SigmaDesigns) chips.
Their major selling point was the strong hardware: very stable aluminum cases  – I know a few people that still use their Egreat-made Realtek 1073 player (~4 years old)

But in 2013 Egreat did not release any major product (only a few low quantity items, probably OEM android TV boxes).

My sources told me that they lost most of the original team (including lead engineer last November and even the sales people).
Their departure even left some unsolved firmware issues on the Realtek players, which hasn’t make buyers very happy.

Early this year they attempted to regain market share by being early adopters of the new Realtek 1195 chipset – that was unfortunate for them, as this chip isn’t ready even now (in July).

So they are moving towards the most popular platforms and they will be releasing:
– end of July: an Allwinner A31S- based android TV box called Egreat A1
– August: an Mstar-based 4K product
– late August: Amlogic S802 and RK3288 models
– early September – their Realtek RTD1195 lineup comprising of several models

They now seem to favor plastic cases and that would really have an impact on their fan-base (see above)
Also, there seems to be some sort of rebranding process going on, they seem to have dropped their “cube” logo in favor of what looks like a falcon.

My thoughts?
– The market isn’t the same, the other “media player” manufacturers quickly adapted to the “android TV” craziness and now they are ahead ( I would mention Himedia and Kaiboer here)
– I can understand that they lost much by putting all their eggs into the Realtek RTD1195 basket, but going after so many different platforms at the same time couldn’t be good for business – unless you have a very good software team (do they?)
– it would be VERY though to compete with Mele and Mede8er on that RTD1195 item line, as they joined forces and they have a full-time dev team, from which I expect great results
– “S802” belongs to Minix  🙂 – I would rather focus more on Rockchip 3288 instead

Do YOU have something to say?

You might have heard of “Egreat” before, the chinese manufacturer is well known as a prolific realtek-based (with a few SigmaDesigns  on the side) media player provider.
As many other media players manufacturers (Himedia comes to mind) they now seem to have dropped the Realtek players altogether and jumped into the Android TV Box bandwagon.
Egreat H8 is the latest mode, a Rockchip RK3188 device clocked at 1.8Ghz, with the (new ) standard 2GB of RAM and 8GB storage.
It comes with Android 4.2 and a custom launcher, 150M 802.11 b/g/n (3dB) wi-fi and a 10/100 ethernet jack.
Other than that, it’s DLNA / AirPlay – ready, Flash 11.1, and they also claim to be “optimized” for XBMC.
It’s a rather tiny device if you compare it with regular media players and from the looks of it it could be a strong competitor to the other 3188 devices