There’s no shortage of Intel Baytrail Z3735F Mini PC’s lately, we covered here the Pipo X7, and we will cover soon the Egreat I2, Egreat I3 and I6 models that we announced with the Egreat 2015 lineup.
Most of them are quite similar in terms of specifications: 2GB RAM, 32 GB eMMC storage, 3 USB 2.0 ports.

Mele PCG32 , yet another Wintel Mini PC that will be announced at CES 2015 is a little different: it has a VGA port, which means you can pair it with your old VGA monitor to have a low-cost mini PC.

Having a VGA ports is not surprising for a Mele product, they’ve gone this road before and they have a loyal fanbase for this.
The case is  all-metal, the unit does have a power button and and should be reasonable-priced.

But what really caught my eye is their Mini PC / Smart Projector called SP-100.
Most Mini PC’s claim to turn any TV into a smart one. Mele SP100 claims to do that with your bedroom wall. 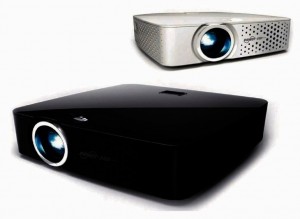 This Android-powered portable projector comes with a small remote control, but it can also be controlled by means of Android app from your tablet or smartphone.
It can connect to your iPhone with an “iPhone to mini-HDMI cable” which could be included upon request, or with one of your ancient devices using the VGA to Mini HDMI cable, also not included.